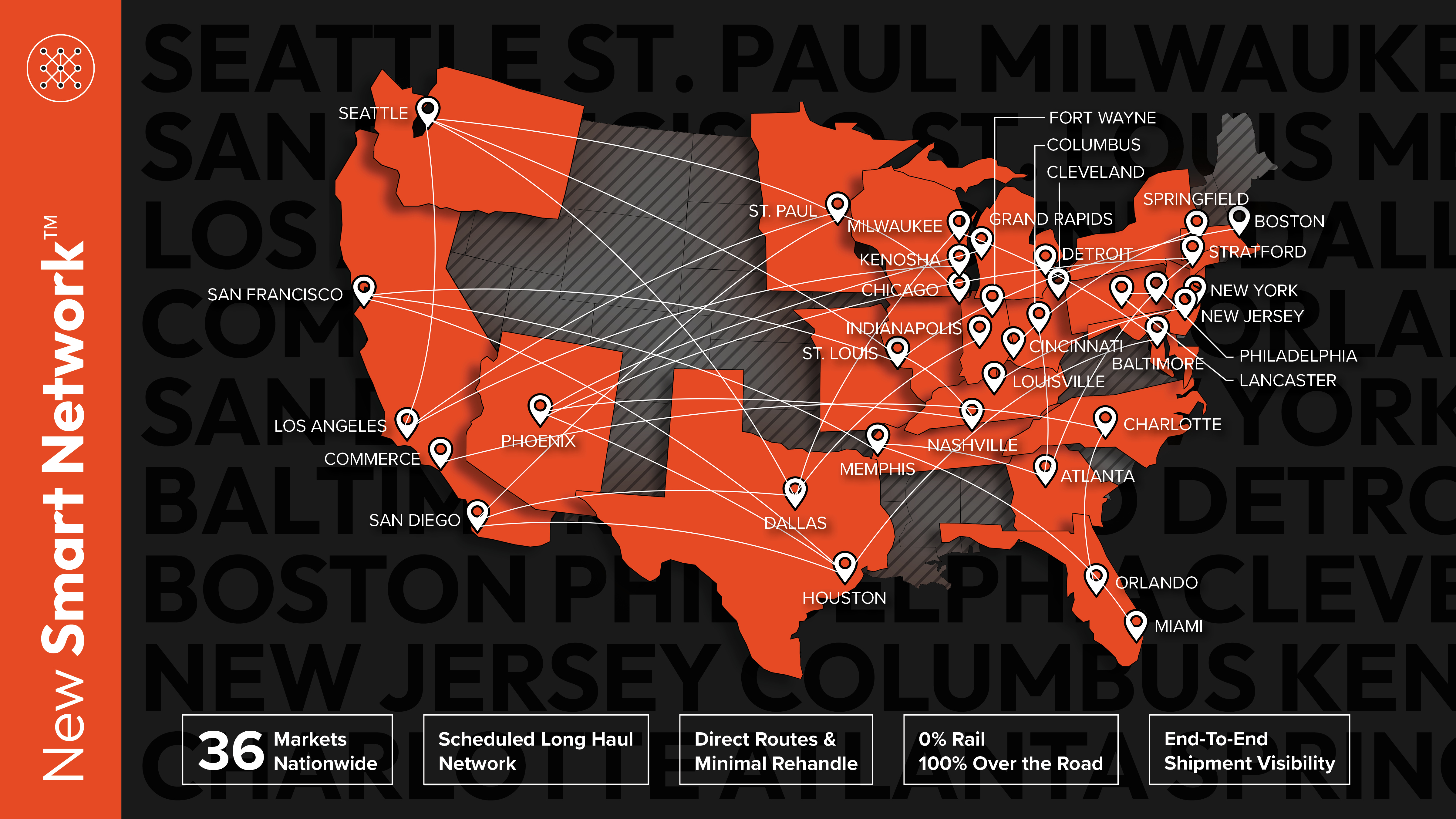 Roadrunner, transportation’s greatest comeback story, today implemented its updated proprietary Load Plan 2.0, further speeding up its network across 130 major lanes. Roadrunner’s fourth round of transit time improvements over the past 18 months is leveraging the industry’s most advanced Machine-Learning algorithm to optimize its less-than-truckload (LTL) network operations and offers more direct long-haul metro-to-metro shipping than any other LTL carrier.

Highlights of the network improvements include:

This major network enhancement is enabled by Roadrunner’s proprietary Machine-Learning algorithm and the new Load Plan 2.0 that leverage Driver Partner Teams, multiple daily departures, and customized dock automation and reflects Roadrunner’s Smart Technology focus on becoming the best LTL carrier in the industry. Recognized by Newsweek™ as one of America’s most trustworthy companies and awarded Most Improved LTL Carrier by Mastio™, Roadrunner continues to win service quality awards from multiple shippers.

“Roadrunner’s Weekend Plus™ advantage gives shippers access to its network on weekends. Our Chicago-to-SoCal and SoCal-to-Chicago lanes represent the fastest transit times in the industry, offering expedited service at LTL rates,” said Phillip Thalheim, Director of Network Analytics for Roadrunner.

“We are committed to building the best long haul LTL network in the industry,” said Roadrunner’s Head of Technology, Operations and Linehaul, Tomasz Jamroz. “Our investments in technology, increased lane density, dock automation, and training and service center improvements enabled us to improve transit times in these 130 major lanes while maintaining service levels above 90%. Our continuous network optimization is expected to result in additional transit time improvements in 2023.”

Jamroz continued, “Roadrunner’s new operating platform is built on execution to drive performance and industry leading service quality. We measure ourselves by the metrics that matter most to our customers. Our Roadrunners are motivated and incentivized to deliver shipments on-time and damage-free. We accept nothing less.”

“We run 0% of our miles on rail and we stopped relying on low-quality third-party agent partners in remote areas,” said Shari Leon, Roadrunner Vice President of Linehaul Operations. “We have best-in-class custodial control and provide full tracking visibility to our customers. We focus on where we are best, a Smart Network™ connecting more metro-to-metro lanes directly and faster than ever.”

Customers are noticing the difference between the new Roadrunner and other LTL carriers. “We have been working with Roadrunner for the last 12 years. Roadrunner has not always been the most dependable LTL carrier, but they have changed a lot in the last couple of years. They really focus on getting things when and where expected and improving their lane times and service levels,” said James Vickery, Head of Logistics at Custom Service Hardware, a Roadrunner customer.

Roadrunner is the smart choice for shippers looking to move freight quickly and reliably. Our optimized, data-driven network moves direct from metro to metro without rail and with full visibility. We partner with experienced owner operators and teams drivers. More than 1,000 drivers leverage our network to empower their businesses and are motivated to deliver freight on time, intact, and damage free. With 1,250 employees, Roadrunner specializes in Smart Long Haul™, metro-to-metro shipping and has more direct routes between its 36 service centers than its traditional hub and spoke peers. Demonstrating a significant reduction in rail use, 100% of Roadrunner’s miles are run by drivers. Roadrunner’s Net Promoter Score (NPS) by Mastio survey, an indicator of customer willingness to recommend a company’s services, jumped 26%. Roadrunner was recognized by Newsweek as one of America’s Most Trustworthy Companies in 2022. (PINK: RRTS)

Please visit the following sites to learn more about Roadrunner and how you can join the freight revolution.

To learn more about shipping with Roadrunner: https://www.roadrunnerLTL.com

Explore careers in sales, operations, and technology at Roadrunner: https://www.shiproadrunnerfreight.com/careers/work-with-us/

To drive for Roadrunner as Owner Operators and Teams: https://run4roadrunner.com/